Don’t forget! If you’re an eligible Thrivent client and have Choice Dollars® available to direct, please keep our organization in mind. For more info or to direct Choice Dollars, call 800-847-4836 and say “Thrivent Choice.” Or click here --> thrivent.com/thriventchoice

View / Download
“But you will receive power when the Holy Spirit has come upon you, and you will be my witnesses in Jerusalem and in all Judea and Samaria, and to the end of the earth.” Acts 1:8 (ESV) 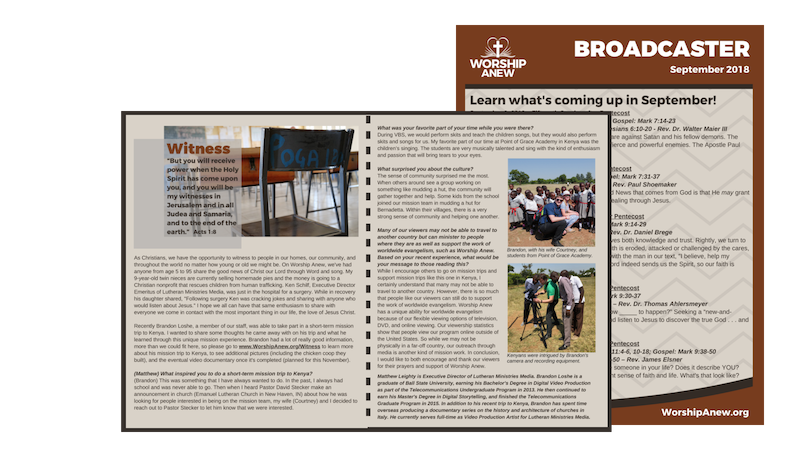 As Christians, we have the opportunity to witness to people in our homes, our community, and throughout the world no matter how young or old we might be. On Worship Anew, we've had anyone from age 5 to 95 share the good news of Christ our Lord through Word and song. My 9-year-old twin nieces are currently selling homemade pies and the money is going to a Christian nonprofit that rescues children from human trafficking. Ken Schilf, Executive Director Emeritus of Lutheran Ministries Media, was just in the hospital for a surgery. While in recovery his daughter shared, “Following surgery Ken was cracking jokes and sharing with anyone who would listen about Jesus.” I hope we all can have that same enthusiasm to share with everyone we come in contact with the most important thing in our life, the love of Jesus Christ.

Recently Brandon Loshe, a member of our staff, was able to take part in a short-term mission trip to Kenya. I wanted to share some thoughts he came away with on his trip and what he learned through this unique mission experience. Brandon had a lot of really good information, more than we could fit in the September Broadcaster, so please explore “Part 2” below to learn more about his mission trip to Kenya, to see additional pictures (including the chicken coop they built), and the eventual video documentary once it's completed (planned for this November).

(Matthew) What inspired you to do a short-term mission trip to Kenya?

(Brandon) This was something that I have always wanted to do. In the past, I always had school and was never able to go. Then when I heard Pastor David Stecker make an announcement in church (Emanuel Lutheran Church in New Haven, IN) about how he was looking for people interested in being on the mission team, my wife (Courtney) and I decided to reach out to Pastor Stecker to let him know that we were interested.

What was your favorite part of your time while you were there?

During VBS, we would perform skits and teach the children songs, but they would also perform skits and songs for us. My favorite part of our time at Point of Grace Academy in Kenya was the children’s singing. The students are very musically talented and sing with the kind of enthusiasm and passion that will bring tears to your eyes.

What surprised you about the culture?

Many of our viewers may not be able to travel to another country but can minister to people where they are as well as support the work of worldwide evangelism, such as Worship Anew. Based on your recent experience, what would be your message to those reading this?

While I encourage others to go on mission trips and support mission trips like this one in Kenya, I certainly understand that many may not be able to travel to another country. However, there is so much that people like our viewers can still do to support the work of worldwide evangelism. Worship Anew has a unique ability for worldwide evangelism because of our flexible viewing options of television, DVD, and online viewing. Our viewership statistics show that people view our program online outside of the United States. So while we may not be physically in a far-off country, our outreach through media is another kind of mission work. In conclusion, I would like to both encourage and thank our viewers for their prayers and support of Worship Anew.

What did you do while you were there?

The first three days of the trip consisted of vacation Bible school (VBS). Each day our 11-person team performed a new skit for the children, which portrayed the theme of that day of VBS. Then we taught them popular Sunday school songs. Following the skits and songs, we split into 3 groups of 3 and took turns doing a craft project, a group project, and then an outdoor activity, rotating which one of those three we did each day. Pastor Stecker and his wife, Carla, worked with the high school students all three days. Most of the afternoons the men worked on building a large chicken coop, while the women painted buildings, taught the younger children health and hygiene, washed the feet of the elderly women, and other service projects.

In addition we made house visits, where we visited the community surrounding Point of Grace Academy, and encouraged individuals to come to Sunday church. One morning we mudded a hut for Bernadetta, a widow, mother, and grandmother, whose home was showing dangerous signs of collapsing. Also, one evening we served over 400 students a meal of rice, potatoes, cabbage, and chicken. After finding out that many of the students had not eaten chicken in roughly a month, we better understood the importance of building the chicken coop, and were very honored to be serving them the meal that night.

Tell us about the people you met.

Two people who we worked closely with were Pastor Dennis Meeker and Deaconess Lorna Meeker. They are really the heart of the ministry there. The way that Pastor Meeker speaks, he brings in so many people into the Christian faith from the community. And Lorna, who we referred to as the Oprah of Kisumu, does so much and reaches so many people, especially women’s groups. All the kids called her “Mama Lorna.” Those two, along with many of the staff at Point of Grace, work very hard. The teachers are oftentimes working by 6:00 AM, and are still there until 7:00 PM. They even take turns staying at the school on the weekends. The amount of time that the teachers spend alone shows how dedicated the staff there is to taking care of the kids physically and spiritually.

You have a picture where you were showing some of the local people your camera, how was that received?

Just like many American children, and even adults, the Kenyans were intrigued by my Panasonic GH5S camera and Ninja Inferno recording monitor. The children especially were very curious in how it all worked. A few of them approached me and said that they want to be a photographer or a videographer some day, and so I showed them my setup and explained my workflow. There was almost always someone around eager to help me. After I shot what I needed the way I wanted it to look, I gave the kids a chance to try it out. Actually, it was nice because at times I could join the rest of the group in the project that I was shooting, and the kids would match the shots that I was doing with me in frame, joining the rest of the group. I rarely had to carry all of my equipment by myself because there seemed to always be someone more than eager to ask if they could help.

Going two and a half weeks without pizza was pretty rough. That is the longest that I have ever gone without pizza. I suffered a pizza relapse, although the food that James cooked for the team was amazing.

On a more serious note, we faced some difficulties building the chicken coop. They do things a little differently in Kenya, which we had to flexibly adapt to. In the United States, normally we buy pre-treated wood, cut it with a table saw or a circular saw, and nail the cut pieces together with nail guns. Well in Kisumu, Kenya, they make their own wood treatment that we had to paint onto the wood ourselves. All of the wood had to be treated because that prevented termites and other bugs from chewing the wood. Additionally, they did not have electricity out where we were working, which meant that we had to hammer and saw mostly everything by hand. After a day of cutting with a hand saw, we actually discovered the following day that they had a generator and a circular saw, which sped up the cutting process. Majority of everything was done by hand, which obviously takes much longer than with power tools.

How can we be praying for your mission site and new friends?

Point of Grace has grown tremendously over the years. First, people can give thanks for everything that the church and school offers to the children. Point of Grace Academy has a tremendous staff that takes very good care of them. Roughly 400-450 children board there. Second, people can pray for the continued growth and support of Point of Grace. Pray that people will find in their hearts to sponsor a child if they have the ability to do so. These children are very deserving, and they never ask for more than they need.

What is God teaching you as you get back into your routine here?

I have learned to appreciate the quality of life that we have in America. Many of the homes in Kenya are home to an entire family and only have two rooms. Many don’t even have electricity. Families have to send someone to fetch water, which may or may not be clean water. I have learned to be very grateful for the blessings that we have in the United States.

How do you want to remember this experience going forward?

The mission doesn’t stop just because we returned home. Every Emanuel mission team adopts a three-point mission statement: 1). Become servants to the mission in Kenya, 2). Grow spiritually as a group and as an individual through our experiences, and 3). Bring the mission home to Emanuel Lutheran Church. When people ask about Joining Hands in Missions and the Kenya mission trips, I can share my experiences and motivate others to reach out to get involved in this great cause. I will be making a 20-minute video documenting highlights of the trip, which we then can share with others, and maybe move them to be interested in a future mission trip.

How did God change your view of the world?

There are hardships that we face in this world. This is because of sin. In spite of the challenges and suffering that we face, they “are not worth comparing with the glory that will be revealed in us.”

What did God teach you about Himself?

Ironically, I learned lessons through the children. Many of the children have already overcome more hardships than what we have seen in our lifetime. In spite of the hardships, we still see the gifts that God gives us, not just earthly gifts, but eternal gifts. In short, I learned to always be thankful, regardless of the current circumstance.

Matthew Leighty is Executive Director of Lutheran Ministries Media. Brandon Loshe is a graduate of Ball State University, earning his Bachelor’s Degree in Digital Video Production as part of the Telecommunications Undergraduate Program in 2013. He then continued to earn his Master's Degree in Digital Storytelling, and finished the Telecommunications Graduate Program in 2015. In addition to his recent trip to Kenya, Brandon has spent time overseas producing a documentary series on the history and architecture of churches in Italy. He currently serves full-time as Video Production Artist for Lutheran Ministries Media.